How to Build AUTHORITY Where Prospects Are Banging Down Your Door

In this session of The Smart Agency Master Class I talk with Jack Mize, host of Influencers Radio and cofounder of Authority Alchemy. Jack is the authority on authority, and we’re going to show you how to build yours so people are banging down the door to work with you.

The first page of Google is not important…

It may sound like blasphemy, but it’s true. Most people think “I need more traffic,” but when you really look at the numbers it’s probably not that you don’t have enough traffic. It’s that the traffic doesn’t have a compelling reason to pick you.

Spending money on pay-per-click and SEO is okay, but you need to start focusing more on building your authority and less on getting to Google’s front page.

Stop calling yourself an expert.

See, educators and advocates have a much better position. They help their clients learn, as well as propel them toward success. Speaking to prospects from this stance allows other people to call you the expert and spread the word on your behalf.

You don’t need to reinvent the wheel.

Quit trying to come up with something brand new! You don’t have to create something from scratch. Find something to do in a new way, or put your personal spin on it. This niche helps you build authority.

Pro Tip: be sure you’re giving the customer what they want, not what you want them to want.

Try thinking of yourself as a doctor. Doctors don’t list all of their services to their patients and ask them to pick one. No, doctors have the authority. Be like a doctor: listen to their problems, diagnose the issue, and prescribe a solution.

Being the authority: 4 Issue Formula

Once you’ve reframed yourself as an educator and an advocate, you need to create an event around your authority. Write a book, do a podcast, whatever you want. Use that platform to educate your prospects and build your authority.

Jack suggests using the 4 Issues Formula. If you can address the following questions from the prospect, then you’ll be way ahead of the competition: 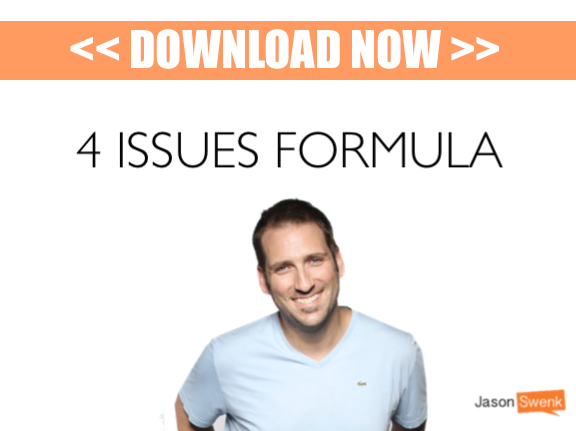 These are the questions prospects are bringing to you. If you can answer them before they’re even asked, you will be building authority.

Pro Tip: stay away from saying “consultation.” It turns people off. Instead, call it an evaluation or an assessment. Personally, I charge for the assessment because it helps me pre-qualify serious prospects.

And remember – you need to be making the conversation about them, not you.

What you need to do right now.

What’s the one thing you can do right now to start building authority? Microspecialization.

Too many people try to cast too wide of a net in order to ensure they aren’t missing any opportunities. What you should really be doing is less, because it actually gets you more in the long run. Take a look at your menu and trim it down!